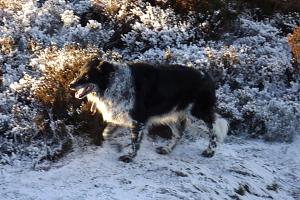 I think that most Dogs have voices even if they sometimes come through an owner who understands and translates.

Being a voice for a living, I think I could translate what my (sacked sheepdog) Peg was saying most of the time. There were times I really didn’t enjoy having to do this, however. Her voice was similar to an angry/sweet/sneaky Highland five-year old.
I am nice to my husband always. I do whatever he asks me to do. I don’t complain about the long wait for tea. The noisy eating. The pile of dishes in the sink. Various things that need doing/fixing/the division of work. When he’s just being plain annoying. Peggy, however, was dreadful.
‘Oi you! Where’s my teatime and my grub of my mum too?’
Often her language didn’t translate too well.
‘Mum shall we be put the news on while Dad is having and chewing his noisy teatime food?’
I would say;
‘Peg really this cheek and rudeness has to stop. Come on Pete, I don’t want to be the only one disciplining her here’
‘Ignore her’ he would say confidently ‘If no one thinks she’s funny she’ll stop eventually’.
Unfortunately, she didn’t. She just kept on blurting out whatever was in her head.
‘When am I going for my f…ing walk you w…ker!?
Sometimes she could be so sweet too;
‘Mum, you’re lovely’
‘Aw thanks Peg, you’re lovely too …sometimes’
‘Why did you marry my dad?’
Peg! Rude!
If she’d been a child, she would have been in bed early then in borstal because there was no controlling the sarcasm, the cheek, the name-calling, and the criticism.
She was mostly nice to me probably because she needed me to be her voice.
With the kids she used to point out things I wouldn’t have noticed. Often, they would really get it from me because of her.
‘Mum there is seems a funny smell from Jack. Has he been at the smoking are we thinking?’
‘No Peg I’m sure he hasn’t he’s far more sensible than that.’
‘Mum, Maya has been in your place where you sleep nicking your make-up that cost a very big fortune and not doing her homework I’m just saying.’
‘No, no Peggy – Maya wouldn’t do that.’
Happy blethering and voicing wherever you are, you trouble-making, rude, spying, lovable, unemployable Sheepdog x