Can't I Just Be a Bit Posh For A Change? 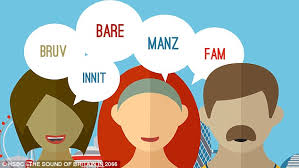 On my CV it says quite clearly - in black and white:

In fact it should say;

'not bad ear for some accents mostly involving impersonations of the person to whom the accent belongs.'

I've never been that good at picking up regional Scottish accents. It might be something to do with being scared of the real people with that accent. With English accents strangely, there are not that many I can't do. RP I find particularly easy.

Around these rural parts you can't just go running off to find an accent coach so I have to use pronounce it.com or whatever on Google.

The first two exciting jobs involve a trip to the Big Smoke. There's an easy one surely it goes like this;

'Blinky blonky blimey guv'nor if I ain't goin' down the apples and pears and up me Rosie Lee so Gedowattmapub!'

Thankfully – I'm not being asked to play the female equivalent of Dick Van Dyke in Mary Poppins and instead I am narrating a portion of a book based on Donald Trump's 'nasty woman' comment.

As a small part of this project, I am reading the essays of three different Scottish women all from different areas, the first is a black woman from Glasgow then a teenager from Stornoway, then a woman of American descent from Edinburgh.

'So great thanks Angela – can't wait, cool, amazing, fab. So we'll get the RP's in and do them first and then we'll get you in with your three different accents from three different parts of Scotland, one of these women is from a different part of Scotland with a subtly different accent based on her ethnicity and family background ...also one of the Scottish women has American parents so if you could add a bit of the old over the pond drawl to her accent that would be great...The one from Stornoway is just someone from Stornoway for easy peasy that one! Oh and can you get across London for 9.30 am in the sweltering heat on a bus because there is bound to be a tube strike ..and if you could do all this without having any problems with dehydration and a dry mouth from the heat and the nerves from being desperate to get this right because you've always wanted to work for us and also you're trying to build a client base in London, that would be great!'

What? No! We've got a whole city full of RP girls! We need your three different Scottish accents, all characters of different ages and ethnicities!

I'm a professional, I'll prepare by reading the book one hundred times, practising the accents, taking notes developing the characters. Loads of time.

'Oh hi person I worked for last year (and felt sure would never employ me again because of a mix up where I told the author I thought the characters could have had more depth, the story was a bit of a drag and the whole thing ended abruptly before it had begun). Didn't know it was the author to be fair.'