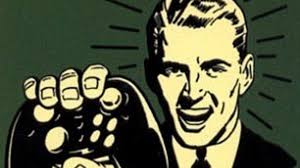 A boyfriend from a dim and distant past put me off Space Invaders - now known as 'gaming' a long time ago.

I won't forget the first moment I saw his head being turned by his true love - the release of the plug- in- to- your- telly game version of the Disney animated film Aladdin.

The first I noticed of 'the problem' were the cold sweats if he had been away from his telly too long. A request to watch Brookside was met with terrified shaking and once he went on his knees begging me to:

'let me try get onto level 3, it shouldn't take too long and after this I promise, never again!'

Level 3 it seemed was like trying to pin down a shadow. The end came one night when I found myself in the kitchen of my own flat walking around with a hairbrush singing:

I had to tell him where to go. Game over.

How was I to know that many years later I might have required this experience as training in my career as a voice artiste? So having completed the first stage of my training, I have managed to bag a few ads, corporate work, some animations, some audio-books. The new thing to do is to become experienced in the Space Inva....I mean 'gaming' industry. So I auditioned for a couple of jobs. I was excited when one company came back and said they liked me and would be in touch. I heard nothing else,so I thought - back to the drawing board I need a bit more training.

Fortuitously, my Alma Mater (Voice Over Training Scotland) in Glasgow were offering further tuition. So I planned my escape from this dark valley.  One week to go until the course......

Dear Angela sorry for the delay etc. Are you still available to do the job?

Reading further down the email -

Please can you have the audio delivered to us within the next two days - sign this agreement and to confuse things even further please tell us how much money you want.

Ok so how to reply to this?

Dear.... Thank you so much for the opportunity, yes that would be lovely and I know when we spoke previously I said I had lots of computer game experience. The truth is closer to - I have none. However, the good news is I am going to be learning lots of new skills this weekend and so if its ok - could we hold off until then and you can have your audio back not in two days but in two weeks!! How does that sound? ...and by the way a deposit of twenty thousand pounds and a 50 per cent cut of any profits would be acceptable.

Ok time for my cold sweat. First I don't know how to do it! Second I lied and said I did!

So weighing up the options I decide just do the audio and then go on the course and check afterwards that I did it right, by which time it will be too late BUT I can always say.......

Oops I sent you the wrong file - that was my rehearsal file!! What Am I Like?

Anyway,......nothing ventured. I'll go and learn about the cartoony stuff - how hard can it be?!

Arriving in Glasgow and no chance to potter down Sauchiehall Street it's straight into the booth to learn how to lipsync with animation. This is new to me but I'm sure I will be fine (after all I am the person who tried really hard after the first course and got some work).

So, this is how it works, you watch the video, you've got your script now say the words and match those to the speed the animated characters mouths are moving -

Everyone else is in and out in a few minutes to high fives and back slapping - For me however, it goes something like this:

Character's mouth moves.....I start speaking.... I speak, speak, speak, I speak - I'm still speaking and now the other character's mouth is moving and I'm still speaking as the first character whose mouth is now shut. Outside there is laughing. But its ok because it's only the D and B the trainers and they're used to this level of ridiculousness (I hope) - all the rest of the students are off studying Stanislavski somewhere so it's all chillaxin'. So I try again - this time I'm speaking before the character one opens his mouth and still speaking as character two as the credits are rolling. Eventually, they put me out of my misery and let me out of the comedy booth. I open the door to discover that all the students are there clapping and being nice and I'm even called 'epic' .

So 'Epic' I am and I will be putting that on my CV as a recommendation!

Thank you to Donald and Borja at Voice Over Training Scotland for the fantastic weekend and you'll find them here: